Airbrake notifiers collect up to 5 lines of code for each stack frame. Notifiers that support code hunks right now:

You can also access code hunks via the add_filter API (read notice[:errors].first[:backtrace][:code]). For notifier authors: be sure to check our API documentation to see where code hunks belong in our JSON schema. 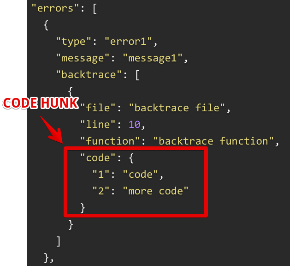 Code hunks are available now on all paid plans. However, if you are on the free plan, you still can send them. Once you upgrade to a paid plan, old code hunks that you’ve sent while being on the free plan would appear in the dashboard.