El Matador de Errores (English translation: The Bug Killer) was born as Erron T. Aardvark on XX September 2020. Erron has won countless matches against bugs and errors in renowned arenas, such as Ruby, Rails, Python, and JavaScript. After millions of debugging matches, El Matador de Errores is considered to be the best bug wrestler in the programming world. He is recognized by his trademark purple “A” mask, and his quirky character as the “guardian angel of developers.”

In his early life, Erron admired bug-squashing aardvark luchador, Repelente de Insectos (Bug Spray). As a fan, Erron watched every match featuring his favorite luchador on T.V. His parents, John and Aria Aardvark, joked that many couches and lamps were broken as Erron practiced his wrestling moves in the living room. Upon entering middle school, Erron joined the wrestling team where his natural wrestling talent shined. Gym teacher and retired luchador, Hedges Hog knew Erron had the talent and moves to go Pro. Hog enrolled Erron in low-level bug matches in the Magento arena. In his early 20’s, Erron finally garnered national attention upon defeating a 500 level error. Le Repelente de Insectos, impressed by this, publicly offered his congratulations. From there on, El Matador de Errores’ wrestling career took off. 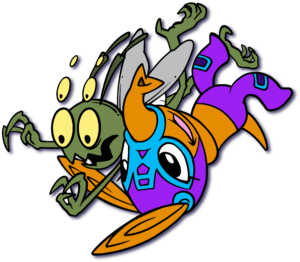 Debuting in the wrestling world as a técnicos (good guy), he impressed programmers with his ability to resolve popular errors that plague apps everywhere. Under Erron’s protection, rudos errors in the 3xx, 4xx, 5xx series, and several others have yet to defeat him.

As Airbrake’s representative, Erron spends his time monitoring applications and squashing bugs of all levels to keep their customers’ code error-free.

Erron does not have much of a personal life outside of debugging. But he always makes time in the morning to check his Airbrake error console, scroll through the news and drink a cup of coffee. As he’s fond of saying, “A Java a day, keeps the bugs away.”